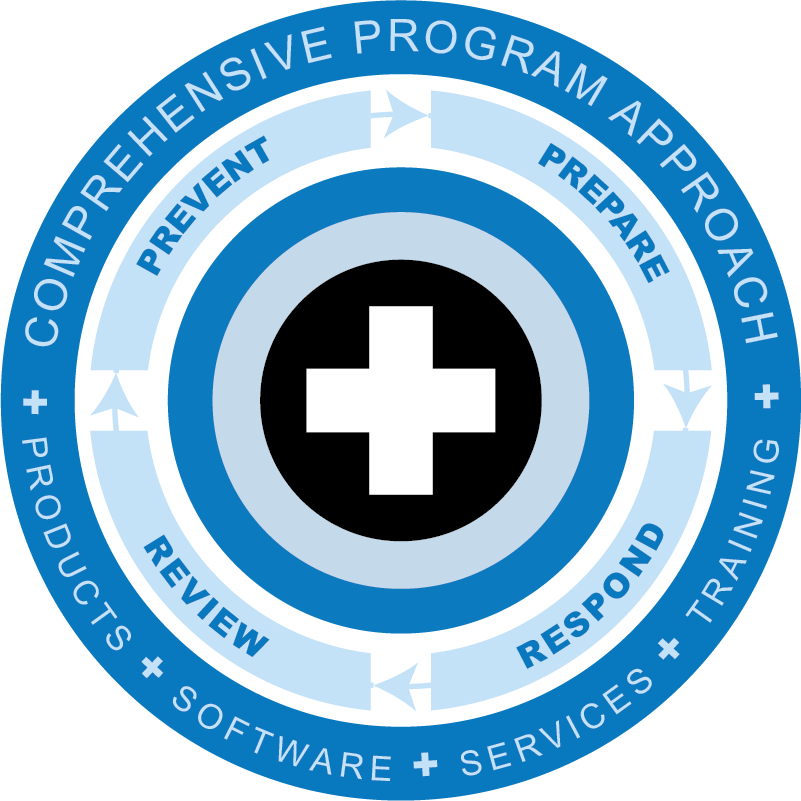 As an industry leader in emergency response and preparedness, we like to share our knowledge, experiences and the latest news.

Waukon, IA-May 13, 2014- The community of Waukon, Iowa and surrounding areas are now equipped with new lifesaving devices. Philips Automated External Defibrillators (AEDs) were installed in various locations throughout the community and to local law enforcement and public safety officials, thanks to the direct mail fund drive held by the Veterans Memorial Health Care Foundation last fall. This drive successfully brought in over $25,000 in funds from Allamakee and Northern Clayton County communities. These new defibrillators are located in each city police department in the Veterans Memorial Hospital coverage area, all Allamakee County Sheriff’s vehicles, and the ER of Veterans Memorial Hospital in Waukon as well as several other locations that were noted as high risk areas in need of the devices.

These defibrillators are part of the new Community Cardiac Arrest Specialty Team (CCAST), which was initiated in the community 2 years ago. This team responds to every cardiac arrest reported in the area. The team brings all equipment and performs any initial care needed at the scene instead of waiting until the victim arrives at the hospital, which makes a big difference in rural areas like these. Communities that implement teams like CCAST raise survival rates from 3% to 25%. This team’s survival rate since beginning has been an astounding 75%, proving how beneficial these teams are in communities.

AED devices are a critical component in increasing survival rates among sudden cardiac arrest (SCA) victims. SCA is the leading killer in the United States and claims over 300,000 lives annually in the United States alone; more people every year are killed by SCA than by cancer and strokes combined. The key to fighting SCA is defibrillation (use of an AED) within a very short period of time from the onset of SCA. The statistics show that for every minute that passes there is a 10% decreased chance of survival. AEDs allow for defibrillation during the initial minutes after 9-1-1 EMS has been called, those critical early minutes make all the difference between life and death during SCA events.

The Philips AEDs were sourced from a well-established industry integrator and wholesaler, Think Safe. Think Safe has been providing life saving equipment and training for over 10 years, all over the world, and is headquartered in the Cedar Rapids metro area. Think Safe is an innovator in the first aid industry and holds various proprietary patents as a manufacturer of First Voice first aid hardware and software products.

Think Safe has seen the value of implementing AEDs and the lives that can be saved by them. New lifesaving stories can be regularly viewed on their website or Think Safe Blog. Think Safe is dedicated to the fight against SCA and gladly offers AED grants or contributing donations to help offset the costs of lifesaving devices.

Think Safe President and Owner, Paula Kerndt Wickham, is originally from Waukon, Iowa, and attended the event in her hometown. Also in attendance were Michelle Kerndt Scroggs and Jennifer Snitker Mittan, whom are also from Waukon, Iowa and key Think Safe employees at the Cedar Rapids headquarters. “It makes us proud to be providing some of our Think Safe services and software or other products to our hometown area. Congratulations to the local community for stepping up and funding this lifesaving initiative and making it a priority. Not all communities have funded these types of initiatives yet and so we are very proud of our hometown community for their success with this project. While Think Safe manages over 10,000 devices nationally, we want local Waukon family and community members know we were pleased to provide product, services and ongoing servicing for this particular project.”

Sudden cardiac arrest (SCA) is a condition in which the heart suddenly and unexpectedly stops beating, causing blood to stop flowing to the brain and other vital organs. SCA usually causes death if it’s not treated within minutes.CPR alone will not restart the heart, so the American Heart Association recommends CPR combined with early defibrillation (within three to five minutes) for the best outcome.

According to the Centers for Disease Control and Prevention (CDC), SCA claims more than 300,000 lives annually in the U.S. alone. It occurs abruptly and without warning, with 84 percent of SCA events occurring outside of the healthcare setting.

Think Safe, Inc. is committed to bringing technology into the field of emergency readiness and response. Think Safe provides products and services that improve access to first aid and emergency training and improve emergency response outcomes. Think Safe is based in Cedar Rapids, Iowa. To learn more about Think Safe and its products or services, please visit www.firstvoice.us or follow Think Safe at Facebook, Twitter, and their Blog.

For more information on SCA, AEDs, or our grant program fill out the form below.